RSPB reports on the plight of the Swallow

The swallow was once common across the country as a farmyard bird during the summer months. Today however RSPB figures show that in many regions, there has been a marked decline their numbers. They were so common for many years, that no one thought they could become endangered, or even considered monitoring their numbers. Sadly the same is true of many other farmland birds.

This delightful little bird, with its distinctive long forked tail and agile flight is a well known harbinger of summer. Swallows usually arrive in early April having flown the 4,000 miles from South Africa, where many spend the winter.  The remarkable thing about these birds is not just that they can fly such distances, but that they return to the same nest site year after year, which is often the place where they were born.

Across much of Europe they are known as “barn swallows”, such is their preference for a farmyard nest site. Originally far less common cave nesting birds, they found the open doors and dark interiors of barns, cowsheds and stables to be an ideal and more widespread substitute. So, wherever farms like Fullers Hill were built, swallows found an ideal home and the population increased.  In the days when it was a mixed farm, raising cattle as well as growing corn, it made an ideal swallow habitat. As well as plentiful nest sites, there would have been abundant insect life in the stock yard and over surrounding pastures. So what of the swallow’s plight? According to the RSPB based at nearby Sandy in Bedfordshire, swallow numbers have shown considerable fluctuations over the last 30 years, but now have an “amber” status because of a recent marked decline. This applies not just to the UK but across Europe. A survey in Leicestershire suggests this may be a loss of over 20% in the last 15 years.

The reason for this decline is thought to be due to several factors. Those flying from South Africa for example, have to make the hazardous crossing over the Sahara Desert. This whole region has become progressively more arid and may cause many to starve en-route.

As already indicated there are problems closer to home. These centre round the considerable changes in agriculture. Since the 1940s for example, the use of artificial fertilizer has meant that farms no longer need manure from stockyard cattle to keep the soil fertile. This is especially true of East Anglia which has become a largely arable farming region.

It is indeed many years since cattle and working horses were kept at Fullers Hill. The flies attracted by the presence of these animals in and around the farm would have been the mainstay of the swallows’ diet. With the animals went the flies, and with them went the swallows.

The loss of the animals has also meant that many older farm buildings have become redundant and have been converted for other uses. This usually denies access to breeding swallows. As a result, they will then either fail to breed or be forced to use a less secure site, where breeding is less likely to be successful. 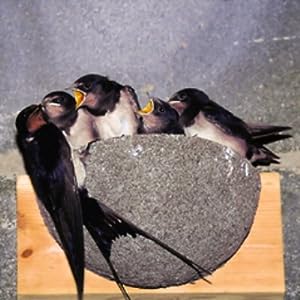 As there is no possibility that Fullers Hill will return to livestock farming in the foreseeable future, the best that can be done to encourage swallows to return and nest in greater numbers is to improve the nesting opportunities. To this end, Fullers Hill Farm Cottages have all been fitted with artificial swallow nest boxes. This important measure will also be supported by the creation of a mud pool, which will allow swallows to build natural nests as well.

They say “one swallow doesn’t make a summer” In the light of recent experience it would appear that we need all the swallows we can get. Perhaps the conservation measures taken at Fullers Hill will go some way towards ensuring that!

The renovation of the 1840 barn was grant aided by the Rural Development Programme for England (RDPE)
which is funded by DEFRA and the EU. The project is being delivered through DEFRA
Content copyright © Jefferies Farming Partners | All Trademarks, Brands and Copyrights Acknowledged
Sitemap | Site by Mark jefferies